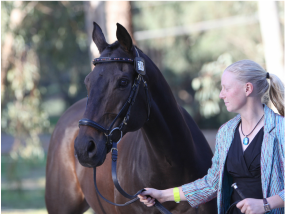 Unassuming, modest, dedicated, talented, entrepreneurial and above all, a genuine horsewoman who simply loves to be around horses – Sophie Warren - one of the leading eventing and dressage riders in Western Australia.

Sophie grew up surrounded by horses and with the support of her parents, sponsors and owners, has developed a strong reputation in the Australian equestrian industry. An Australian Representative and currently competing FEI Dressage and Four Star Eventing, Sophie is known for her focus, professionalism and talent and has quickly come to the forefront of equestrian sport both in WA and nationally.

Sophie’s equestrian roots come from her mother, Sue, who rode throughout her youth in England - representing the Pony Club, competing in all disciplines, and even riding in displays at the UK’s premier Christmas horse show – Olympia. Sue is a huge part of the team helping out in all areas of the operation.

Sophie’s father, Mark, has also been bitten by the equestrian bug and is now very involved in the equestrian community, extending from his role on the Board of Equestrian WA, to building cross-country jumps and helping the competitions get underway.
As a student, her academic record was strong but Sophie opted to gain as much experience in the equestrian industry before deciding on a university course. Her unpretentious and somewhat shy and introverted attitude concealed a burning desire to succeed. She has worked for eventing, dressage and breeding yards in WA, NSW, Germany and Great Britain.

Eventing is Sophie’s passion and with her team of eventers she strives to compete internationally for Australia. “I would sincerely love to get there in Dressage or Jumping, but Eventing is my real love and I couldn’t live without it. The extra level of horsemanship it requires and the camaraderie between fellow competitors – I think that’s pretty special in eventing. Of course being an adrenalin junkie might also have something to do with it!”

Bitten by the professional equestrian bug she decided she wanted to make her mark in the eventing world and make a living out of her innate love of horses. Sophie wanted to show that she could combine her sport, her dedication to horses and her will to be successful financially while never risking her horses’ welfare.

Adopting a evidence-based, ethical training system, Sophie has had success with all kinds of horses. Riders under her tutelage learn to be systematic and empathetic in their approach to training and trouble-shooting. Having studied learning theory and horse welfare at length, she is keen to see this evidence based training more widely adopted throughout the disciplines.
Sophie has had many good horses but none more wonderful than Let’s Impress, a spunky diminutive black thoroughbred gelding who she produced to Four Star level. To see them together, the joy is obvious and the stables and life revolve around his wellbeing. He won Wooroloo CCI*** in 2010, was 7th at Sydney CCI and 10th at Adelaide CCI in the previous year and represented Australia in 2009 with Sophie on board. He has been Western Australian Horse of the Year, winner of various leaderboards and countless other wins up to CIC*** level.

Sophie is a dedicated coach and her passion for training in a sustainable and ethical manner has produced many successful horses and riders throughout the levels and disciplines. She believes that correct, logical and methodical training from the start will put your horse above the competition.
During her trips abroad, Sophie has trained at some of the top barns throughout Europe and the United Kingdom. Her trips have stretched from riding with the current World Dressage Champion to Hunting in the Irish winter, Sophie is forever looking to expand her knowledge and continues to apply this to her training and coaching.

Sophie is one driven sports-woman and business-woman who runs her own race and believes in her own direction. Her love of horses has only become more so as her experience widens and this genuine feeling is obvious and no doubt the passionate basis for all her success.